Eight Auburn University students are the first from the Plains to partner with fellows at Stanford University’s Hoover Institution in conducting research and initiatives for the Alabama Innovation Commission.

Allison Foster, Andrew Miller, Jordan Windham and Regan Moss were selected by the leadership of Auburn’s Honors College, while Shivam Patel, Madeline Ellison, Emily Schramek and Daniel “Trey” Sims III were selected by the Cupola Society in the Samuel Ginn College of Engineering.

Gov. Kay Ivey established Alabama’s first statewide commission on entrepreneurship, technology and innovation in July 2020. In December, the Alabama Innovation Commission, or AIC, announced its partnership with the Hoover Institution, a public policy think tank affiliated with Stanford in Palo Alto, California, to promote innovation and economic growth in Alabama.

The Hoover Institution is known for its fellows, leading scholars in areas such as tech innovation, education, business and economic development. The institution is currently under the direction of Condoleezza Rice, an Alabama native, former U.S. Secretary of State and AIC Advisory Council member.

Auburn students will be working—albeit virtually—with Hoover fellows on specific projects, as well as students selected from the University of Alabama at Birmingham, Tuskegee University, Alabama A&M University and Stanford. Projects should take about 10 weeks to complete.

Miller and Ellison will participate in the Business Incentives and Prosperity project, with Josh Rauh, a Hoover senior fellow and the Ormond Family Professor of Finance at Stanford’s Graduate School of Business. This project will evaluate Alabama’s existing incentives for attracting businesses and make recommendations based on the successes and failures of recent incentive programs around the country.

Miller, from Huntsville, Alabama, will graduate May 1 from the College of Liberal Arts with degrees in economics and political science. Besides the Honors College, he is involved in the Auburn Economics Club, Pi Sigma Alpha National Political Science Honor Society, Auburn Tabletop Club and serves as an academic tutor.

“I consider this experience to be a capstone for everything I have learned at Auburn University, requiring me to apply the entirety of what I have studied into practice,” he said. “Working with the fellows will supplement my Auburn education by allowing me to work with and learn from some of the nation’s foremost authorities in economic development.

“As a lifelong resident of Alabama, I am proud to support this initiative, which will aid Alabama’s understanding of the driving forces and incentives behind fostering economic development. I am hopeful that it will lead to greater prosperity for all its citizens.”

Ellison, from Fairhope, Alabama, will also graduate May 1 from the Ginn College of Engineering with a degree in industrial and systems engineering and a business minor. Besides serving as a Cupola ambassador, she is photo editor of the Glomerata and a member of a social sorority and Tau Beta Pi Engineering Honor Society.

“Being able to contribute to this research is an outlet to further cultivate problem solving and critical thinking skills I have developed through my Auburn education,” said Ellison. “Additionally, it is an incredible opportunity for me to give back to a state and university that have done so much for me.”

Moss and Schramek will join Margaret “Macke” Raymond, founder and director of the Center for Research on Education Outcomes at Stanford, in the project, Deploying Broadband-Based Education. The team will look at the current and potential means for deploying broadband-based education throughout the state to augment the current capacities of K-12 educators to deliver high-quality instruction, especially in the priority areas of science, technology, engineering and mathematics, or STEM, which ties in closely to economic development plans for the state.

Moss, who grew up in Arkansas, but moved to Marietta, Georgia, before starting at Auburn, is a junior, studying microbiology and neuroscience in the College of Sciences and Mathematics, or COSAM. Some of her activities include serving as a COSAM undergraduate research ambassador and a research assistant in various labs. She is also a member of Auburn Students Against Human Trafficking, PERIOD. @ Auburn, NICU and Infant Health Unification, the student advisory board for Student Counseling and Psychological Services, Microbiology Club and Neuroscience Club.

“My Auburn education has given me the opportunity to engage with individuals across numerous disciplines with a range of various expertise,” said Moss. “I hope to apply my education effectively, but also know that this experience will ultimately help me to become a more critical thinker, an engaged listener and a stronger advocate for many necessary statewide and local policy changes forefront to the lives of Alabamians.”

Schramek, who grew up in Birmingham, Alabama, will graduate in August from the Ginn College of Engineering with a degree in chemical engineering. She is this year’s executive chair for Cupola and a student worker in the college’s recruiting and scholarship office. She is a member of Omega Chi Epsilon, Tau Beta Pi and a Delta Zeta sorority alumna.

“This experience will allow me to proudly represent Auburn and the education I’ve received the last five years,” said Schramek. “I plan to apply my engineering education to this project to provide a different perspective which will also allow me to broaden my skills within chemical engineering.”

Windham and Sims will join Rauh and Rick Banks, the Jackson Eli Reynolds Professor of Law at Stanford Law School, in the project, Fostering the Role of Universities. This project will aim to make specific, concrete recommendations for state government policy to build on the strength of Alabama’s universities to grow Alabama’s technology and innovation economy.

Windham, from Cullman, Alabama, is a junior, studying political science in the College of Liberal Arts. She is an assistant swim coach with the Opelika Swim Team and founder of Auburn Get Plugged In, a student organization aimed at helping students safely build a community during the COVID-19 pandemic. She was recently awarded an Auburn University Research Fellowship for the fall.

“This internship is an opportunity to apply the skills and knowledge I’ve learned in my classes to actual policy research,” said Windham. “I am so excited to develop the skills to effectively research and advocate for education policies that lift up communities and change lives in Alabama.”

Sims, from Homewood, Alabama, will graduate next year with a degree in mechanical engineering from the Ginn College of Engineering. He is the director of alumni relations for Cupola and president of the Auburn Biomedical Engineering Society.

“I’m looking forward to this position because I’ll get to work with students from other universities in Alabama to help expand the role of universities with innovation in the state,” said Sims.

Foster and Patel will be part of the Outdoor Recreation Lab project with Stephen Haber, the Peter and Helen Bing Senior Fellow at Hoover and the A.A. and Jeanne Welch Milligan Professor at Stanford’s School of Humanities and Sciences. This project will assess the hypothesis that Alabama’s Cumberland Plateau has necessary environmental characteristics to be a draw for high-tech workers and entrepreneurs but is considered an underdeveloped resource for the state.

Foster, from Tampa, Florida, is a junior, studying wildlife ecology and management in the School of Forestry and Wildlife Sciences. Besides the Honors College, she is involved in Kappa Alpha Theta sorority, Wildlife Society and the Forest, Environment and Wildlife Leadership Academy. Foster is also an undergraduate researcher and a lead peer mentor for Supplemental Instruction.

“This will allow me to take the knowledge and skills I’ve already gained from my time at Auburn and use them in a practical way,” she said.

Patel, from Decatur, Alabama, will earn his degree in electrical engineering from the Ginn College of Engineering on May 1. He is a part of the Cupola Society and a member of Phi Sigma Pi National Honors Fraternity. Patel has served as a Camp War Eagle counselor, Student Government Association senator and EMERGE leader.

“This experience will help me give back to the state and allow me to make connections with those that share similar interests in improving the state,” he said. “It will also shed light on what we can do as Auburn graduates to improve the state of Alabama, fulfilling the mission as a land-grant institution.”​ 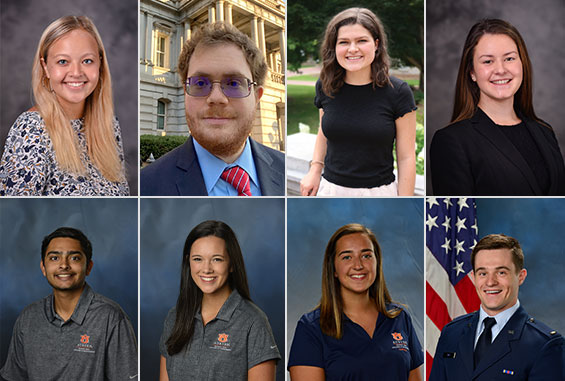 Eight Auburn University students have been selected to partner with fellows from Stanford University’s Hoover Institution in conducting research and initiatives for the Alabama Innovation Commission.