An Auburn University research team from the College of Veterinary Medicine and the College of Agriculture recently became the first to map a high-quality genome assembly of the blue catfish.

The genome, which was published in the journal GigaScience, is essential for genetic improvement using gene-editing or genome-assisted selection and will aid in the genetic enhancement of better catfish breeds for the multimillion-dollar catfish farming industry.

Catfish farming is the largest aquaculture industry in the U.S., accounting for approximately 70% of the nation’s total aquaculture output. Mississippi, Alabama, Arkansas and Texas account for the great majority of total U.S. freshwater catfish production, with Alabama ranking second only behind Mississippi. The primary fish utilized for farming purposes is a hybrid produced by breeding male blue catfish with female channel catfish.

“The hybrid catfish is superior in growth and disease resistance,” according to Xu Wang, assistant professor of comparative genomics in animal health in the College of Veterinary Medicine’s Department of Pathobiology and adjunct faculty investigator with the HudsonAlpha Institute for Biotechnology, who is one of the leaders of the project.

“Faster growth means more profit. Originally, farmed fish were primarily channel catfish, but three major bacterial pathogens resulted in a 40% loss of production and annual economic damage of over $100 million in the U.S. industry alone. The hybrid mix of the blue and channel catfish has improved disease resistance and reduced mortality by half.”

Even so, Wang says there is a critical need for further genetic improvement using genomic methods.

Wang served as senior author of the GigaScience paper, assisted by Haolong Wang (no relation), a doctoral student in biomedical sciences supported by both an Auburn Presidential Graduate Research Fellowship and a College of Veterinary Medicine Dean’s Fellowship. The veterinary researchers collaborated closely with a team from the College of Agriculture’s School of Fisheries, Aquaculture and Aquatic Sciences led by Professor Rex Dunham, an internationally recognized authority in the genetic enhancement and gene editing of catfish.

“This is a fantastic step forward,” Dunham said of the mapping of the blue catfish genome. “There have been many genetic enhancement projects related to gene transfer and gene editing that were not possible for blue catfish without it. As a result, we could not do parallel work with what we are doing with channel catfish. Since a hybrid between channel and blue is the best genetic type for the catfish industry, that also put limitations on what we could do with these tools to improve the hybrid.

“That roadblock is now gone. Having the blue catfish genome available opens a huge treasure chest of markers we can use for other approaches, such as marker assisted selection, and also gives us many more tools to distinguish and track different genetic types of blue catfish. Thanks to this research, we are much less limited than before.” 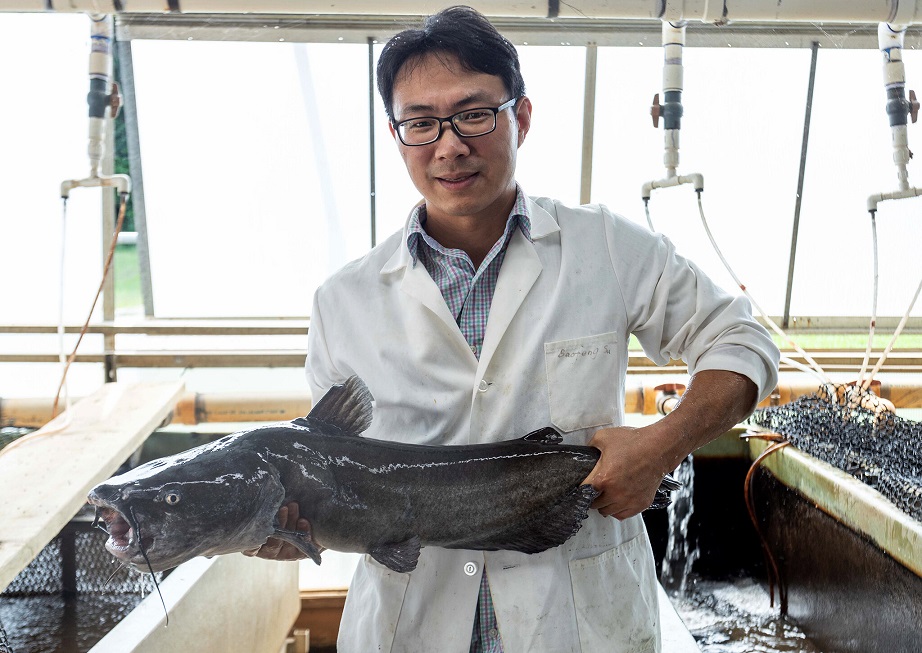 Auburn University postdoctoral student Baofeng Su is part of an Auburn research team that recently became the first to map a high-quality genome assembly of the blue catfish.