A revolutionary variety of grass developed in Auburn University’s College of Agriculture has recently taken root at some exclusive golf courses around the nation following an acquisition of rights by an Oregon-based seed grower and wholesale supplier.

The bentgrass variety, called AU Victory, was forged from the adversity of historic drought conditions that decimated golf courses throughout the state in 1999 and 2000. AU Victory was developed by Edzard van Santen, professor in the Department of Crop, Soil and Environmental Sciences. He recognized the potential in a grass that survived a devastating drought and then began years of research that ultimately produced AU Victory in 2015.

Already, MVS has sold AU Victory to golf courses around the nation, including as the exclusive variety for greens at the scenic McLemore in northwest Georgia. AU Victory is part of a new course in South Africa and has also been chosen to seed in the fall by the Lookout Mountain Club in Georgia.

Up next for the seed that is known for its perseverance in the face of adversity—Auburn and MVS hope to see it featured nationally and internationally at the most prominent golf courses.

“Of course, our goal has to include placing AU Victory at the best golf courses in the nation,” Russell said. “But really, the sky is the limit with such a durable, heat-tolerant grass that has been rated as a superior surface by golfers around the world.”

AU Victory is seen by many as the perfect solution for golf course superintendents looking for a putting surface that will thrive in the high humidity and heat.

“AU Victory was more than a decade in the making,” he said. “Research and development just take that long, and then when it finally was released, people heard about it—and wanted it—but there was never enough supply to satisfy demand. It became almost an urban legend. And that’s what got us hooked on it.”

Innovative research, rooted in a commitment to fuel industry growth, has been a driving force in Auburn’s College of Agriculture. The development of AU Victory wasn’t just a win for Auburn, it was a win for seed growers and golf course superintendents throughout the world.

“Auburn scientists always need to keep the needs of a specific industry in mind when conducting research,” said John Beasley, professor and head of the Department of Crop, Soil and Environmental Sciences. “Dr. van Santen realized the need for an improved creeping bentgrass cultivar for golf courses, especially one that responds well to stressful climates. If AU Victory continues to perform as we have initially seen, we expect it to become a turf cultivar that will be widely used on golf courses around the globe.”

With one of the largest research facilities in the nation, MVS has established relationships with universities including Rutgers University and North Carolina State University. AU Victory is creating a natural partnership with Auburn that researchers hope will lead to further collaborations.

“In the past, we had a plant breeding program in turfgrass cultivar development, and that is the program from which AU Victory evolved,” Beasley said. “Mountain View Seeds could certainly be a very important partner for commercializing cultivar releases from our forage and grass breeding program.” 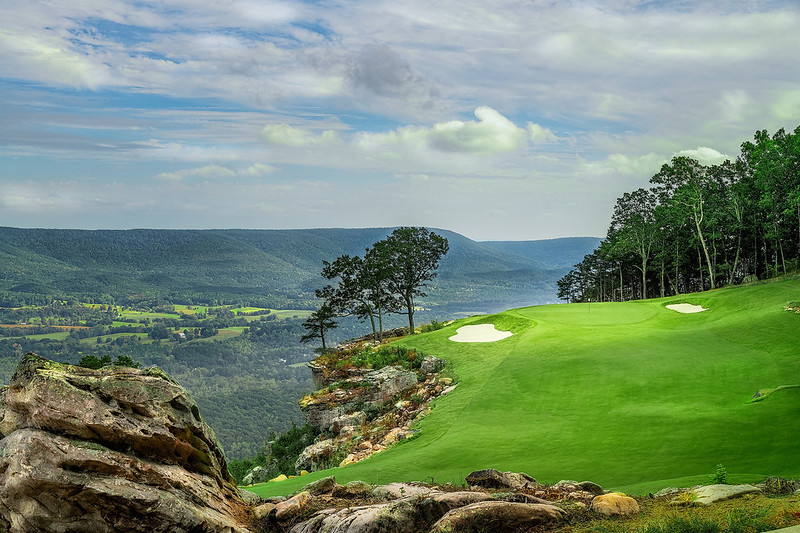 Consistently rated as one of the best finishing holes in golf, McLemore’s 18th hole features a dramatic landscape with an awe-inspiring rocky ledge, surrounded by beautiful hillside and a breathtaking view of the horizon and Lookout Mountain. The luxury resort’s northwest Georgia course also features AU Victory, the revolutionary bentgrass developed at Auburn, with a beautiful, durable and exceptional putting surface. (Photo by Dave Sansom)