Ongoing, Auburn-led research into biofuel and biochemical production just got a lot more eyes on it.

Supported by a $2 million U.S. Department of Energy award issued in 2018, as well as funding from the USDA's National Institute of Food and Agriculture, insights from the project led by PI Yi Wang, associate professor in Auburn's Department of Biosystems Engineering, were recently highlighted by the journal Nature Communications — for obvious reasons.

"Our findings represent a breakthrough," Wang said. "Production of biofuels and biochemicals from renewable resources through biological routes is environmentally sustainable and friendly, and is considered as a possible solution for the pressing issues related to energy crisis and environmental deterioration."

Despite tremendous investment over the past decades, developing viable efficient bioprocesses that can achieve high production has been much easier said than done.

Thanks to Wang's team, that's not as true as it once was.

"We have developed a potentially economically viable bioprocess that can produce fatty acid esters at unprecedented levels," Wang said.

Naturally occurring short-chain, fatty acid esters are the source of the sweet smell in fruits, such as apples, bananas, pineapples and strawberries. They typically find applications as artificial flavorings in food and cosmetics, as well as high-grade solvents used for manufacturing plastics and resins. In addition, esters could be a fuel of desirable properties which can serve as an additive to gasoline, diesel and even jet fuels.

"Conventionally, esters are produced from petrochemical-based fatty acids and alcohols through the chemical catalysis process called Fischer esterification," Wang said. "The reaction consumes a large amount of energy and generates tremendous wastes, and thus is not environmentally friendly.

"To avoid these problems, we chose to engineer non-pathogenic and safe Clostridium bacterial strains known for their natural ability to produce building blocks that could be used for ester synthesis. We envisage Clostridium as the ideal platform for ester production with such native genomic pathways.”

Clostridium strains, a group of bacteria that thrive in the absence of oxygen, are notoriously difficult to manipulate genetically. Wang’s group is pioneering versatile genome engineering tools for clostridia based on a new technology called CRISPR, putting his lab at the forefront of this particular research.

“To convert these building blocks into esters, we introduced genetic pathways from fruits or yeast responsible for ester synthesis,” Wang said. “With further systematic genome engineering, we were able to produce esters called butyl acetate and butyl butyrate at the highest bioproduction and lowest cost levels to date. And we did it using corn stover – a renewable product made from the stalk, leaves, husks and tassels that are left after corn is harvested – as the raw material."

According to Wang, a techno-economic analysis is essential to evaluate the economic practicality of a new bioprocess before it can be scaled up for commercialization.

“Our analysis suggested that butyl acetate production from corn stover through the developed bioprocess in this study could be competitive economically,” said Haibo Huang, an associate professor in the Department of Food Science and Technology at Virginia Tech, who led the techno-economic analysis in this study. “With further development, we anticipate economic feasibility of the process at commercial scale.”

The promise of Wang’s engineered strains for economic and environmental benefit have not gone unnoticed. Recently, a small Canadian biotech company engaged Wang to test drive the patent-pending strains. They plan to partner with larger companies to scale up production and advance the ester-based products to market.

“Dr. Wang put a lot of elegant genetic engineering into boosting ester production and that investment of time and talent is starting to pay off.” said Troy Brady, senior licensing officer at Auburn’s Office of Innovation Advancement and Commercialization. “The expectation is that with additional improvements to the strain and the economies of industry-scale production, the process will be more environmentally friendly and less expensive compared to current fossil fuel-derived processes. That translates to a win for everyone.”

Wang’s work has also been featured and highlighted by the editor of Nature Communications as one of the 50 best papers recently published in "Biotechnology and methods."

“We presented a concept of producing high-value and easy-separable end products — esters, like oil, don’t mix well with water and thus can be easily separated from the fermentation broth — as a strategy to improve bioproduction efficiency and economic viability,” Wang said. “Our principle of selecting the most appropriate microbial host for specific bioproduction is also inspiring.”

“I should also emphasize the importance of multidisciplinary collaboration on this work,” Wang said.

In addition to Auburn and Virginia Tech researchers, collaborators from Iowa State University, Tel Aviv University in Israel, Shandong University in China, and University of Science and Technology of China also contributed to the project.

The work was supported by the U.S. Department of Energy’s Office of Energy Efficiency and Renewable Energy through the Co-Optima initiative, through which Wang and collaborators produce bio-based esters to be blended into diesel fuel to reduce soot and greenhouse gas emissions, and to yield cleaner engine operation in cold-weather conditions. The work was also partially supported by USDA's National Institute of Food and Agriculture for bioprocessing organic waste streams into valuable bio-based products to enhance bioeconomy. 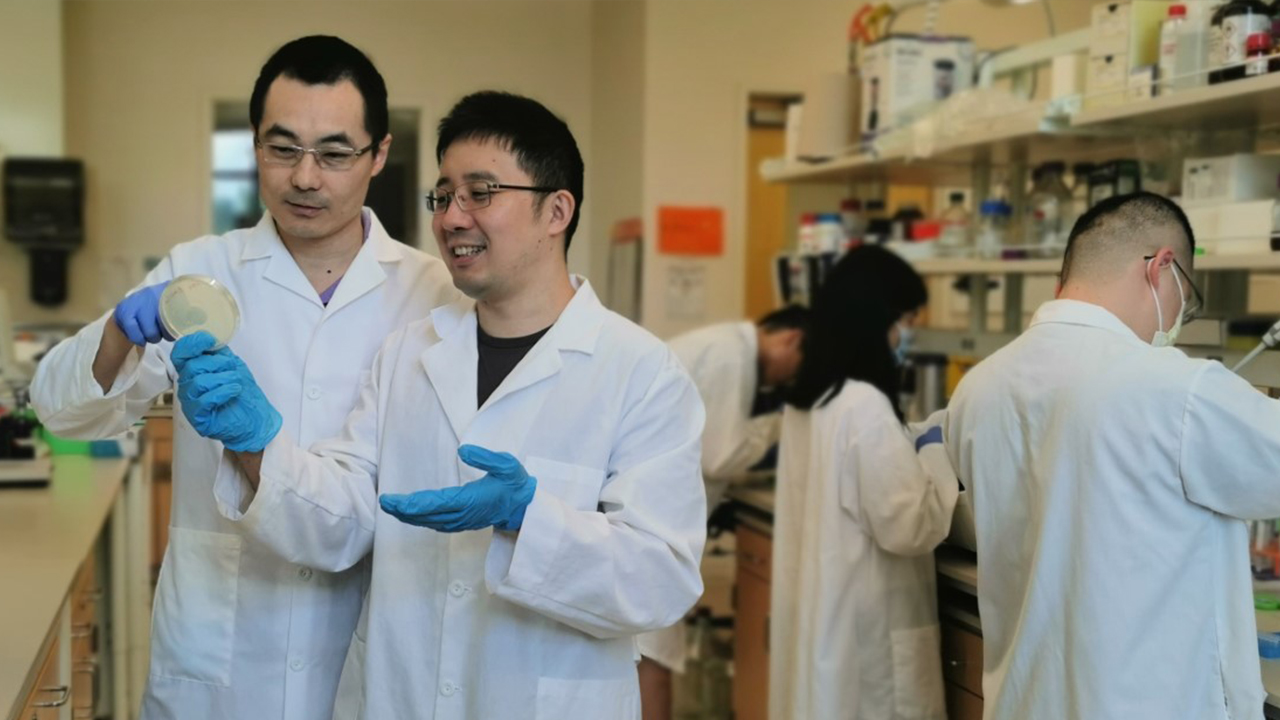 Yi Wang (left), associate professor in the Department of Biosystems Engineering, works with post-doc Yuechao Ma in the lab. The research from Wang’s lab for renewable fatty acid ester production has been recently published and highlighted by the journal of Nature Communications.