Researchers develop small-volume diagnostic assays that could be useful for variety of diseases, conditions

We often hear the stories about industry joining with academia to turn research developments into commercially viable and marketable products. Most of those relationships develop through the promotional efforts of the university’s technology and intellectual property advancement program. Sometimes, though, they can happen when companies become interested in a graduate’s qualifications for employment.

Such is the story behind a partnership formed between Auburn University and a Philadelphia-based biotech firm to commercialize technologies developed by Christopher Easley, the C. Harry Knowles Professor in the Department of Chemistry and Biochemistry in the College of Sciences and Mathematics.

InnaMed, based in Philadelphia, is a new firm devoted to the development of easy-to-use, fast-and-accurate home blood testing and health monitoring systems for the individual patient. Alongside their work applying microfluidic methods to help understand diabetes and obesity, Easley’s research team also develops small-volume diagnostic assays that could be useful for a variety of diseases and conditions. When InnaMed learned about Easley’s research in electrochemical assay development through the interview process with one of his graduate students, the company not only wanted to hire the student, but also acquire the technology for commercial development.

InnaMed was started in 2016 by co-founders Anup Singh and Eshwar Inapuri.

“We met while students at the University of Pennsylvania,” said Inapuri, who serves as the CEO. “Anup was pursuing a degree in biophysics, and I in bioengineering. We became friends while working in the Issadore Lab on technologies to advance diagnostics and enable early detection of diseases like traumatic brain injury and pancreatic cancer in a non-resource intensive manner.”

The two formed InnaMed with the goal to bridge the clinical communication gap between health systems and their patients, and, in 2017, learned of Easley’s research in microanalytical sensing techniques while conducting a job interview with one of Easley’s graduate students, Subramaniam “Mani” Somasundaram.

InnaMed optioned the Auburn technology to test it out and visited Easley’s lab to learn how to use it. They soon decided to license the technology and found the expertise that Mani gained while at Auburn to be a great asset to the company.

“After visiting with Auburn’s Office of Innovation Advancement and Commercialization, we entered into a licensing agreement on Dr. Easley’s technology and ultimately hired Mani shortly afterwards,” Inapuri said.

Easley describes his research as developing super-sensitive, very small instruments capable of detecting and measuring many types of biomarkers.

“Electrochemistry can be used to make very small instruments,” Easley said. “One of our inventions is a generalized assay that can work for small-, medium- or large-sized molecules, giving us the possibility for rapid ‘dip and read’ methods that are attractive for point-of-care settings. However, for some clinically relevant analytes at low concentrations, background interferences can be an issue, so we also invented a modified electrochemical instrument that removes background and increases sensitivity. These unique measurements not only help my laboratory with sensing on microfluidic devices, but they also are well-suited for InnaMed’s realm, clinical readouts in human blood.”

“The pharma industry has indicated a keen interest in commercial products that can do what Dr. Easley’s technology has made possible,” Inapuri said.

The company is in the process of taking Easley’s technology from the laboratory to a marketable product that can simplify the individual patient’s health journey for a variety of conditions that require frequent, rapid and accurate testing of various types of biomarkers in the blood. Inapuri says they hope to have the product ready to seek FDA approval within the next nine months. 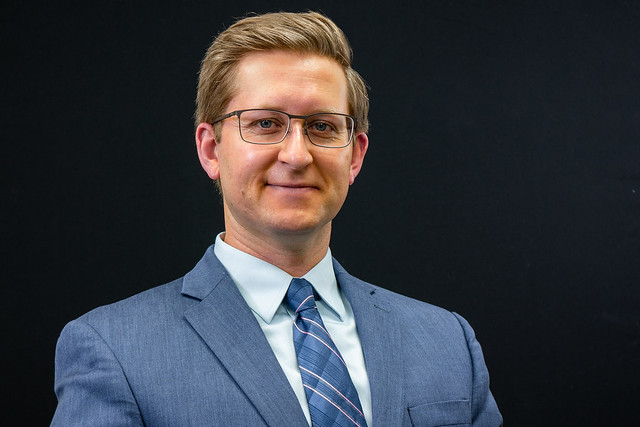 Auburn Professor Christopher Easley and his research team have developed super-sensitive, very small instruments capable of detecting and measuring many types of biomarkers.