Farmers will need to change their management strategies over the next few decades to adapt to impending climate extremes, according to a study recently published by researchers at Auburn University and Pennsylvania State University.

The study, featured in the June 11 issue of the open access journal PLOS ONE, is the first climate change study on corn that focuses on aspects of growth and development from an agronomic viewpoint. The majority of such studies have used either simulation or statistical models to evaluate yield losses.

And while the research itself focuses on three northeastern U.S. states, the general conclusions are applicable for all regions, including the Southeast, says Rishi Prasad, assistant professor and extension specialist with the College of Agriculture’s Department of Crop, Soil and Environmental Sciences.

“We need to investigate the Southern region as well,” said Prasad, who began the initial study during his time as a post-doctoral scholar at Pasture Systems and Watershed Management Research Unit of USDA’s Agricultural Research Service at Penn State.

“We are going through similar phases as those in the Northeast, where we have a very wet period followed by a very dry period. We need to understand how future climate change is going to affect our current scenario and what kind of best management practices we need to be prepared for the next 50 years.”

The warming trends occurring are specific to location, he says.

“The globe is warming, but we are seeing different heating effects from one location to another,” Prasad said. “It will be difficult to make a general recommendation for an entire region. Instead, recommendations will need to be location-specific, depending on how fast a location is warming.”

Prasad and his colleagues chose corn as the subject of their study because of its importance to U.S. agriculture, offering many possibilities for feeding and fueling a growing world population.

“However, future corn production will potentially face vagaries of extreme weather in a warming climate that is being affected by greenhouse gas emissions,” he said. “These emissions currently are the highest in human history and are expected to continue (rising?)in coming decades.”

While mean annual temperatures already have increased throughout the world, the global temperature is expected to increase further by 36 degrees F. by 2050, Prasad said, and the local effects on heat, cold and precipitation extremes will vary widely, with regional differences in geography and landscape features.

Corn production in the Northeast U.S. will suffer from the impacts of climate extremes like other corn-growing regions, but it draws special attention from researchers because it is a major dairy region, and corn is a major feed for the industry. Also, the Northeast is cited as the fastest-warming region in the contiguous U.S.

“Most climate-change studies on corn have been carried out in the Midwest and Great Plains, with little attention to the Northeast, so we saw a need to evaluate the local risks of extreme climate on corn production in the region,” Prasad said.

Although several global and regional studies have evaluated heat and water stress effects on corn yield using historical weather data, there is less information on growth-stage-specific anomalies in corn production at local levels, he said.

“Warming trends in the U.S. are not spatially and temporally uniform, so local evaluations of climate-change effects on corn production are important,” Prasad said. “Examining temperature anomalies, water deficit periods and frost occurrences during the growing season are of great importance as these factors are strongly associated with yields.”

The study views data from nine different climate models that simulate the climate of the entire world.

“Because they’re simulated on a larger scale, we fine-tuned the data down to a smaller scale,” Prasad said. “We downscaled it so we could study the impact of climate change from one place to another place in one particular region.”

Researchers used the climate models looking 100 years into the future, all the way to the end of the 21stcentury. They considered current farming practices, such as the time when farmers are planting and harvesting their corn. The study focused on locations in New York and Pennsylvania, where corn production provides feed for the dairy industry.

“We looked at how corn production is going to change in the future,” Prasad said. “One of the most important stages of the corn lifecycle is the reproductive stage, where the corn produces pollens. If, during that period, the temperature exceeds the upper threshold of 95 degrees F., the pollen viability decreases, or the pollens will not be fertilized and will not form corn grains. We’re looking at what’s happening in the future in terms of these high temperatures episodes, especially during the corn reproductive phases.”

The study concludes that if farmers continue with current management practices, there will be a dramatic decrease in yield, and the reason for that is two-fold, he said.

“High-temperature frequencies will increase, and 2050 is when we can expect to see a very clear demarcation of this effect,” Prasad said. “We also looked at the moisture deficit trends during corn growth stages, and it is widening. The corn will experience more drought during its main reproductive phase. These two situations will make the scenario worse in the future.”

The study goes on to recommend possible remedies for corn producers, including a shift in planting dates and irrigation.

“The months of January, February and March are getting relatively warmer than they used to be, and the warming trends will continue in the future,” Prasad said. “This means growers can shift their planting dates backward from the typical April planting dates for corn to avoid high heat intensities during the reproductive stage of corn.”

Also, with the widening gap between evapotranspiration and precipitation, especially during corn’s prime reproductive phase irrigation is recommended.

“We need to approach in an integrative way how these weather changes will affect environmental nitrogen and phosphorus losses and affect water, air and soil quality.” Prasad said. “We need to develop the next generation of best management practices in terms of managing water and in terms of managing nutrients so that we have an adaptive response to a changing weather pattern.” 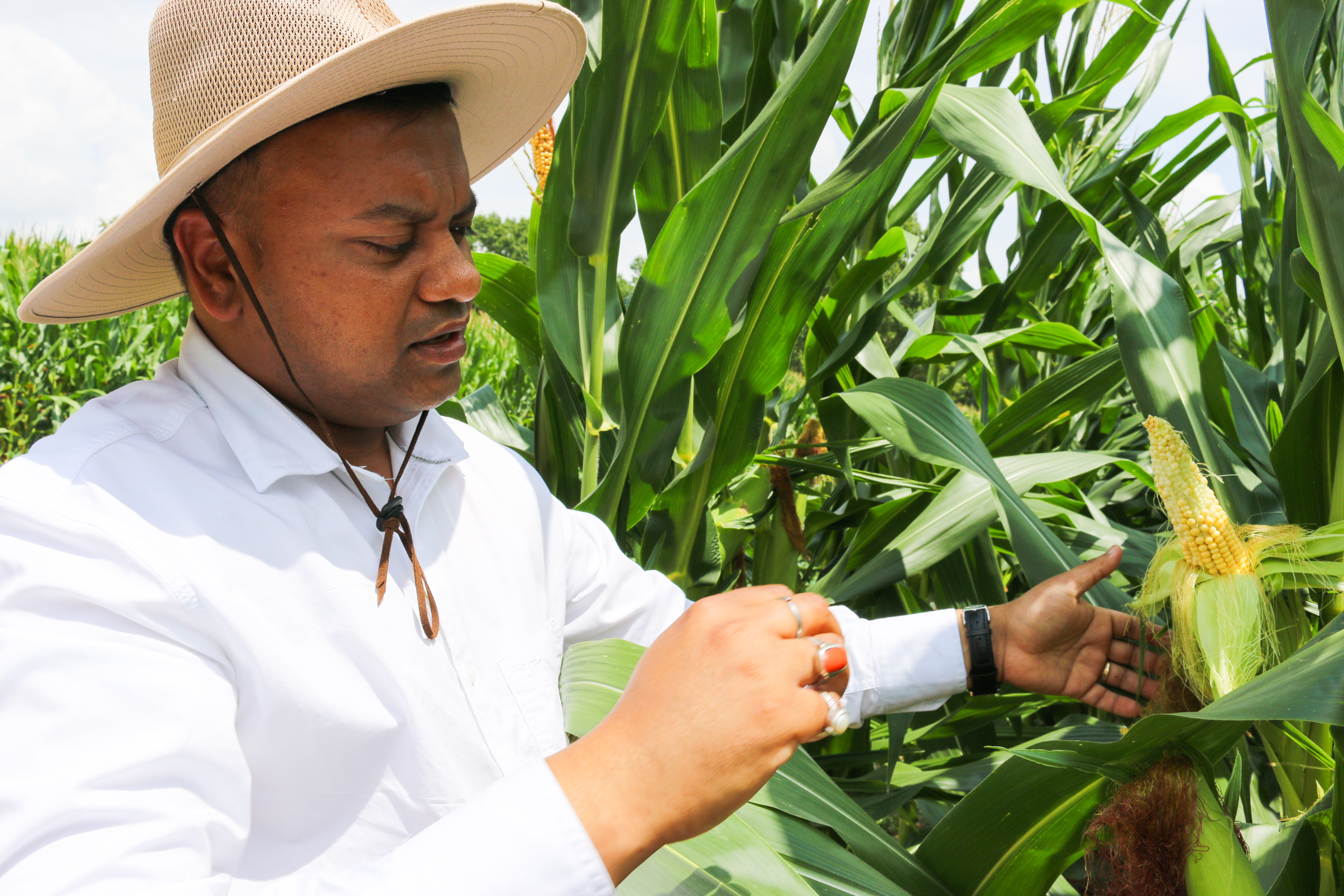