With a National Science Foundation grant secured by Auburn University faculty, undergraduate students at Auburn will design, build and test two CubeSat satellites that will launch into space in 2018.

CubeSats are small satellites that come in multiples of 4-inch cubes. The grant marks the first time the National Science Foundation has awarded a grant for the construction, space launch, and operation of two, three-unit, CubeSats – a project that provides invaluable workforce development experience to Auburn's undergraduate students.

Wersinger, along with Mike Fogle, assistant professor in the Department of Physics, will submit a proposal to NASA to obtain a rocket launch that will carry the CubeSats into low Earth orbit for a mission that will last approximately 18 months. The two satellites will undergo many tests and reviews before launch, which will take place in about three years.

"CubeSats are great for research because they are inexpensive to build, you can fly a lot of them at the same time and receive more information and you can look at data in almost real time," Fogle said.

The student and faculty researchers will ultimately study the structure of powerful gamma-ray flashes associated with thunderstorms in the tropical regions of Earth. Auburn launched its first, single-unit CubeSat, AubieSat-1, into space in October 2011. The two, three-unit CubeSats for the NSF-funded mission are named TRYAD 1 and TRYAD 2. "TRYAD" stands for Terrestrial RaYs Analysis and Detection.

The two CubeSats are currently being designed, built and tested solely by undergraduate student members of the Auburn University Student Space Program under the guidance of faculty in the Department of Physics and the College of Engineering. More than 30 students this semester alone are balancing their classroom obligations with 15 to 20 hours per week working in the lab on TRYAD 1 and TRYAD 2.

"The work pays off because people in industry recognize the program creates future leaders," Wersinger said. "The students are given a unique, work-force development experience where they work in teams to complete a space experiment, understand the importance of deadlines and gain a basic understanding of management and systems engineering. Also we have worked and continue to work with several NASA partners like Goddard Space Flight Center, Ames Research Center and Marshall Space Flight Center."

In addition to designing and building TRYAD 1 and 2, Auburn students will be responsible for commanding and controlling the CubeSats in space using the NASA Near Earth Network of ground stations. Through communication with the two satellites, students will also test PULSAR, a new high-bandwidth radio developed by NASA engineers, capable of transmitting 150 million data bits per second.

The project represents a collaboration with University of Alabama Huntsville, and the funding was secured by a team of scientists from UAH and Auburn University, including faculty members Wersinger and Fogle, as well as Daniel Harris, associate professor in Auburn's Department of Mechanical Engineering and Professor Saad Biaz of Auburn's Department of Computer Science and Software Engineering. The grant is in the amount of $893,873 for a project titled, "Collaborative Research: CubeSat: Observing Terrestrial Gamma-ray Flash (TGF) Beams With A Pair Of CubeSats."

UAH representatives on the project are responsible for developing the science instrument used to detect the gamma-rays while on orbit. They will also collect and analyze the science data, but Auburn University will have access to the data before it is distributed to the scientific community at large.

The Auburn University Student Space Program is part of the College of Sciences and Mathematics. For more information about the college, go to http://www.auburn.edu/cosam/. 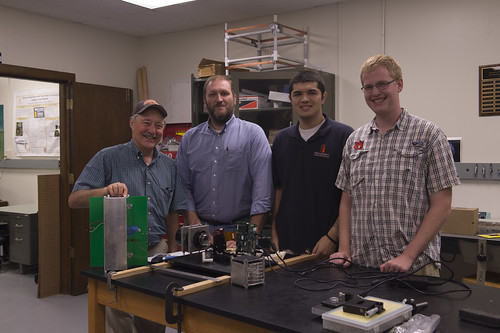