Auburn University and the Southeastern Conference have announced that Professor Bruce Tatarchuk of the Samuel Ginn College of Engineering has been honored with the SEC's Auburn University Faculty Achievement Award for 2015.

Tatarchuk, chemical engineering professor and director of Auburn's Microfibrous Materials Manufacturing Center, will receive a $5,000 honorarium, and he becomes Auburn's nominee for the SEC Professor of the Year, who will be selected from 14 nominees representing SEC universities.

The SEC Faculty Achievement Awards, created to recognize faculty accomplishments, scholarly contributions and discoveries, were established by the SEC presidents and chancellors and are administered by the SEC provosts. The awards were first presented in 2012.

"Dr. Tatarchuk epitomizes the character of a university professor who has excelled inside and outside the classroom," said Timothy Boosinger, Auburn University provost and vice president for academic affairs. "His accomplishments include being recently appointed the Charles E. Gavin III Endowed Chair in the College of Engineering and also named as a 2014 Fellow to the National Academy of Inventors in recognition of exceptional accomplishments in innovation and invention to benefit society."

Each recipient of the SEC Faculty Achievement Award must be a full professor at an SEC university, have a performance history of extraordinary teaching and a record of scholarship that is recognized nationally or internationally.

"I am humbled to receive this tremendous honor from Auburn University and the SEC," Tatarchuk said. "I would like to thank the university and my fantastic colleagues in the Samuel Ginn College of Engineering and all across campus for providing such an excellent environment for faculty, student and stakeholder success."

Tatarchuk's discoveries have resulted in 12 U.S. patents and a large number of foreign patents. His work focuses on chemical interactions occurring at solid surfaces and he has pioneered the design and development of microfibrous entrapped sorbents, catalysts and electrocatalysts which facilitate extremely high levels of chemical reactivity. This work has led to the commercialization of numerous products, including double layer capacitors, advanced batteries, polishing sorbents, heterogeneous catalysts, filters and thermal and electrical conduction aids. These products impact hundreds of millions of users each year. He is a 2001 co-founder of IntraMicron Inc., a Delaware corporation and small business operating in Auburn, Alabama. 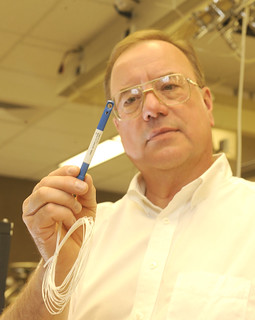