Supported by a $175,000 grant from the National Science Foundation, or NSF, a researcher in Auburn University’s College of Sciences and Mathematics is working to improve the capabilities of Brain-Computer Interface, or BCI, an advancement that has wide potential for helping people with severe motor impairments, detecting and diagnosing health issues and providing new interfaces for gaming and other uses.

Jingyi “Ginny” Zheng, an assistant professor in the Department of Mathematics and Statistics, received her award from the NSF’s Division of Computing and Communication Foundations for her project “Towards A Manifold-based Framework for the Brain-Computer Interface.”

“We are working to improve the current statistical framework upon which BCI operates using a new measurement to quantify the differences in the connectivity of the human brain,” Zheng said.

BCI as a technology has existed for a number of years, Zheng says. However, it is limited in its current functionality by its mathematical framework.

“For example, a severely motor impaired person confined to a wheelchair, could operate and maneuver their chair by thought process using a BCI device,” Zheng said. “Over the past decades, numerous methods have been implemented in BCIs to decode and translate brain signals. However, BCIs still suffer from low robustness and low reliability as they are sensitive to artifacts, noise, outliers and require a long calibration process.”

Zheng’s research aims at constructing a manifold-based framework that will improve the robustness of BCI technologies and expand practical applications. The project is funded through 2024 and Zheng said, once BCI capabilities are enhanced, the technology has potential not only in the health and medical fields, but also in biology, neuroscience, agriculture, remote sensing, computer vision and other areas.

Zheng joined Auburn’s faculty in 2019. Her research interests are in areas of data science, machine learning and data-driven computing. She also teaches several statistics courses in the College of Sciences and Mathematics. 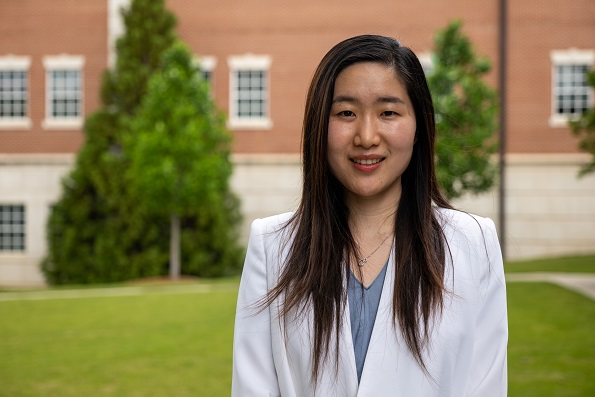