Auburn University professors Richard Burt and Keith Hébert are turning to social media and the Selma, Alabama, community for help in making progress on their “Bloody Sunday” research project.

The interdisciplinary tandem is enlisting a group of Auburn Honors College students to help expand the project’s reach to the social media realm, and they have established a Facebook page where visitors can connect and help identify marchers who participated in one of the seminal moments in civil rights history—Bloody Sunday on March 7, 1965, in Selma.

On that day, John Lewis, Hosea Williams and a group of approximately 600 marchers were confronted by Alabama State Troopers armed with tear gas and metal batons as they began a march for equality toward Montgomery. The nation watched in horror that night on ABC as marchers were pummeled by law enforcement in what became known as “Bloody Sunday,” an event that would serve as a catalyst for Americans across the country to rally behind the civil rights movement like never before.

The researchers are hoping the public can help distinguish the identities of the brave men and women who took part in the march that day.

“Social media platforms such as Facebook offer public historians invaluable tools to connect with multi-generational audiences across a broad geography,” Hébert said. “We have received critical information from former Bloody Sunday foot soldiers and their loved ones near and far as we build a comprehensive database of those marchers’ names and stories. Our Honors College students are gaining experience communicating with diverse audiences as we all come together to collect and celebrate the heroic sacrifices those foot soldiers made in Selma on March 7, 1965. Those learning opportunities will bode well for their future career endeavors as they help America build a diverse, inclusive and equitable society.”

In addition, Burt and Hébert have received considerable support from the Selma community, in particular the Selma City Council and Selma High School. City council members were briefed about the Auburn-led project at a recent meeting and have pledged their support and resources to aiding the endeavor’s success.

“Actually putting names to these faces is a game-changer,” Selma City Council Chairman Billy Young said. “We’re extremely enthusiastic about recording history this way, because for so long, these men and women who did so much never had their names provided. It means a great deal for Auburn and all the students and everyone to come together for this project.

“This project brings us back into the forefront in the fight for social justice that’s been taking place in Selma, and identifying these people this way is a great homage to Selma. We are gung-ho and really proud of the work that’s being done, and seeing everything unfold this way makes the city council feel even better about our support and makes us want to support it even more.”

The project also will be promoted with posters at the Selma Dallas County Public Library, and photos from that fateful day will be on display at a November photography festival in Selma thanks to the efforts of Bloody Sunday march participant JoAnn Bland, who identified herself in one of the historical images.

“I think it’s amazing, and I’m glad to be a part of it,” Bland said of the project. “That was the first time I’d seen a picture of me, and I don’t think the ordinary foot soldiers get the recognition for what we did. Our kids know about Dr. King and John Lewis, but they don’t realize ordinary people like me were out there fighting and didn’t give up.

“It makes the pictures come alive when you know [people’s] names, and they’re pictures that need to have captions and need to have names listed with them. So many people have been left out, and a lot of people around here have the blood of those history-makers running through their veins and they should know about them.”

“I think this will be the most accurate depiction of Bloody Sunday that has ever been documented,” said Turner. “It will speak to the core of the people who were there on Bloody Sunday, the march that changed America. The civil rights movement was built by everyday people who felt the sting of segregation and being treated as second-class citizens, and those were the people who rallied together on Bloody Sunday, which was the most revolutionary act of defiance since the Civil War.

“I think this project is going to help give Perry County the national recognition it deserves for its role in the foundation of Bloody Sunday, and more than 50 percent of the marchers were from Perry County. This project that Auburn University is doing will help bear witness to Perry County and its dominant role in Bloody Sunday.”

Selma High School teacher Veronica Pitts has even enlisted her AP History class in helping advance the project, particularly working on the social media component and enlisting family members to help identify Bloody Sunday marchers. Pitts was first introduced to the cause of identifying marchers while working for the National Park Service prior to becoming a teacher, so this project is a chance to rekindle a passion project from her past.

“I’m excited to be able to share this project with my class,” said Pitts, a Selma High School alumnae who has nearly 30 students in her class. “The biggest thing has been trying to convince them to get some of their grandparents to assist us in this process in identifying some of those foot soldiers. When this opportunity presented itself, it made my heart sing because I had an opportunity to get back to some work I’d done nine or 11 years ago.

“We’re excited to get the ball rolling and see how much we can get done this semester and the rest of this year.”

Burt—who also has set up a workroom for students to utilize for the project in Dudley Commons on campus—and Hébert have been energized and are immensely appreciative of the wave of support the research venture has garnered this year.

“The project is really starting to come together now,” said Burt, the McWhorter Endowed Chair and head of the McWhorter School of Building Science in the College of Architecture, Design and Construction, who has worked for years to survey and map the area where the historic confrontation occurred. “We have set up a workroom in the exhibition space of the College of Architecture, Design and Construction in Dudley Hall. The space is open during regular working hours, and folks are free to come visit to see how the project is progressing.”

The project recently received another boost when it was chosen to receive a nearly $190,000 grant by the National Endowment for the Humanities, or NEH, to support a pair of week-long workshops to include 72 K-12 educators in field studies that focus on the significance of Selma in the early days of the civil rights movement. Those workshops will be led by Hébert and his fellow Department of History colleague Elijah Gaddis, and their team members also include Junshan Liu, CADC, Leslie Cordie, College of Education, Meghan Buchanan, College of Liberal Arts, and Danielle Willkens of the Georgia Institute of Technology, and the team also is working with faculty from Alabama State University.

The overarching hope for the project is to identify as many Bloody Sunday participants as possible and, therefore, perhaps better understand the crucially important civil rights event while also elevating Selma’s status as a historical site.

“Our project highlights the need for additional historical research and documentation for one of the most famous moments in American history,” Hébert said. “By taking a fresh look at Bloody Sunday, our research has revealed rich details about how the march unfolded that prior historians have overlooked. We intend to help those in Selma who want to do more to preserve and interpret the historic landscapes connected to this seminal event.

“Today, the historic conflict site is in dire need of historic preservation and interpretation. Hopefully, we can build a coalition to save this historic site before it is too late.”​ 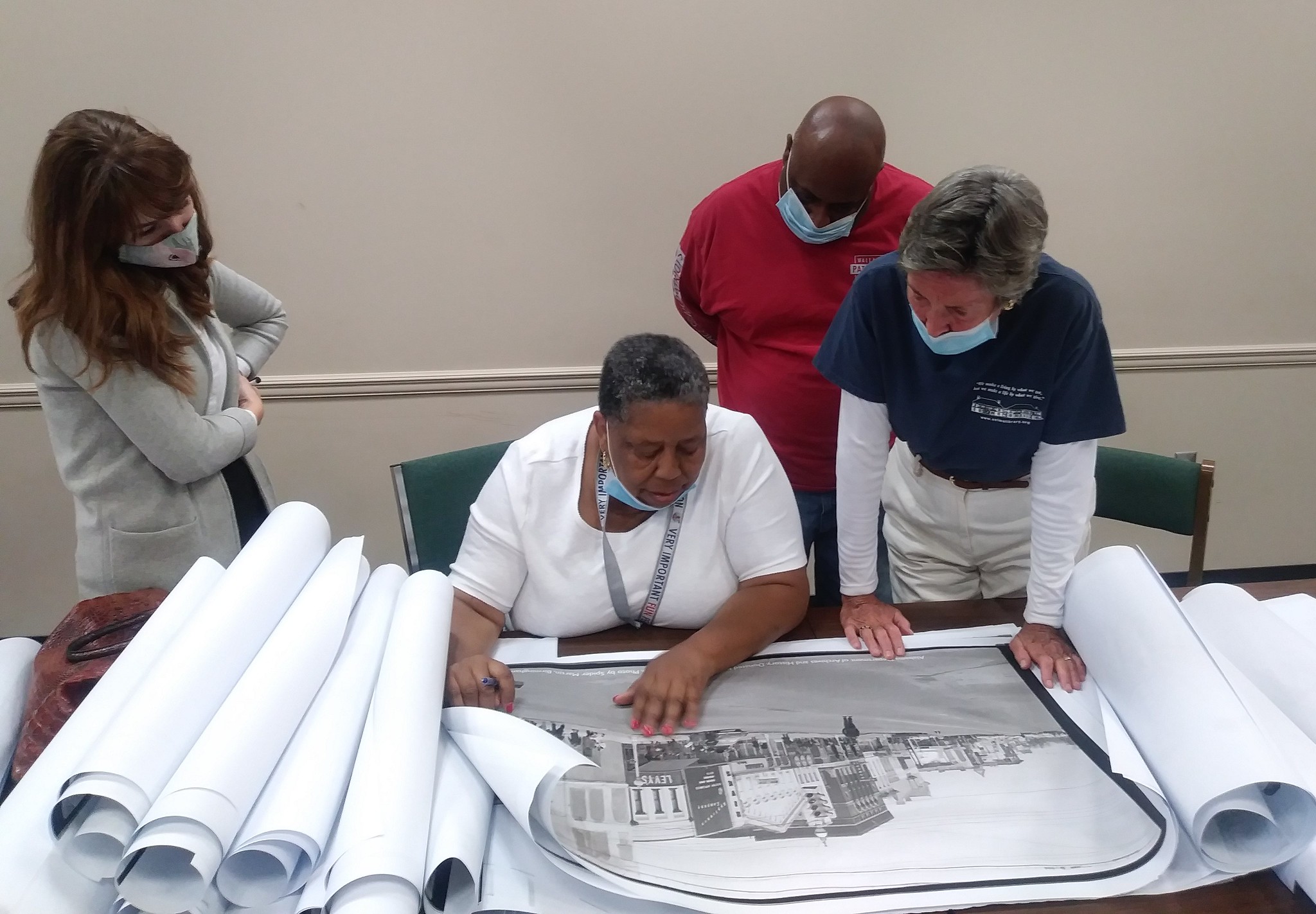 The Selma, Alabama, community has come together with Auburn University researchers to help identify marchers from the 1965 Bloody Sunday incident. From left to right, Rachel Metcalf from the City of Selma, marcher JoAnn Bland, Selma Times reporter James Jones and Selma Public Library Director Becky Nichols recently met up to look at historic photos. Bland identified herself in one of the photos for the first time thanks to the project.