An Auburn University multidisciplinary project focused on the infamous “Bloody Sunday” civil rights event that occurred in Selma, Alabama, on March 7, 1965, is the recipient of an award as part of $28.4 million in humanities grants recently announced by the National Endowment for the Humanities, or NEH.

Co-directed by professors Elijah Gaddis and Keith Hébert of the Department of History, their project, titled “Bloody Sunday, Selma and the Long Civil Rights Movement,” is the recipient of a $189,837 award in the “Landmarks of American History and Culture” category. One of five awards in that category, Auburn’s grant will support a pair of week-long workshops to include 72 K-12 educators in field studies that focus on the significance of Selma in the early days of the civil rights movement.

“We plan to deeply immerse workshop participants in the landscape and built environment that existed in 1965 and in learning about the participants and events that led up to and included the march from Selma to Montgomery and the clash between marchers and law enforcement that came to be known as Bloody Sunday,” Gaddis said.

Gaddis described the Auburn team as multidisciplinary. The College of Liberal Arts, College of Architecture, Design and Construction, or CADC, and the College of Education are involved.

The team’s efforts build on earlier research by Hébert and Richard Burt, the McWhorter Endowed Chair and head of the McWhorter School of Building Science in CADC. Other team members include Junshan Liu, CADC, Leslie Cordie, College of Education, and Danielle Willkens of the Georgia Institute of Technology, and the team also is working with faculty from Alabama State University and a high school teacher from Selma.

“We will be using much of the work that Drs. Hebert and Burt did on documenting the historic sites from that period in Selma’s history,” Gaddis said.

That earlier research used historical photos and video footage, photogrammetry software, laser scanners, drones and design concepts and technology to survey and map the area where the confrontation occurred. Through those efforts, the researchers were able to identify and chart the location of everything from local businesses, vehicles parked on the road and Alabama State Troopers, to the civil rights marchers, spectators and media, including the ABC News van that captured the events as they unfolded.

“This largely recreates the scene from 1965 in the form of schematics and computerized plans in a pursuit to preserve the setting of Bloody Sunday,” Gaddis said.

Most associate that Selma event with the well-known Edmund Pettus Bridge, according to Gaddis.

“But the confrontation did not occur on the bridge,” he said. “Our workshop will incorporate Hebert and Burt’s architectural landscape study with other in-depth studies and information about actual participants. Moreover, the workshops will not focus only on Selma, but also on other Alabama locations that were part of this significant event in the American civil rights movement.”

The NEH on Wednesday, Aug. 18, announced the full slate of $28.4 million in grants to support 239 humanities projects across the nation.

“The grants demonstrate the resilience and breadth of our nation’s humanities institutions and practitioners,” said NEH’s Acting Chairman Adam Wolfson. “From education programs that will enrich teaching in college and high school classrooms to multi-institutional research initiatives, these excellent projects will advance the teaching, preservation and understanding of history and culture.”

Gaddis said Auburn will begin hosting its workshops in summer of 2022 with events planned in Selma, Montgomery and Auburn.

“We will end the last day of the workshops on the steps of the Alabama Capitol Building, where the marchers ended their journey from Selma to Montgomery,” Gaddis said. 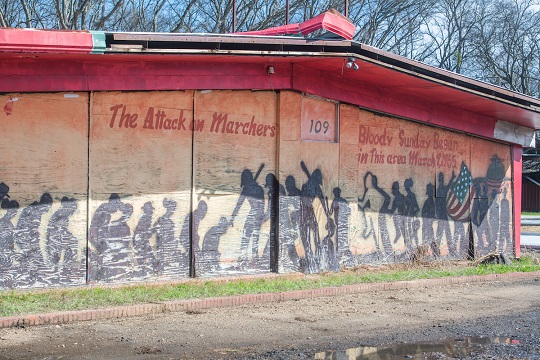 Pictured: "Bloody Sunday" mural in Selma, Alabama. Richard Burt and Keith Hebert have conducted extensive research about the incident known as "Bloody Sunday" that occurred in Selma, Alabama, on March 7, 1965. Auburn assistant professor of history Elijah Gaddis and Hebert will use that research to conduct a pair of week-long field study workshops for 72 K-12 educators.