Lynn Von Hagen, an Auburn University Presidential Research Fellow and doctoral student in the School of Forestry and Wildlife Sciences, spent her first semester in a faraway but familiar location—Kenya, where she has worked on the ground for two years researching African elephants, specifically studying crop-raiding, a perilous issue that endangers the lives of both elephants and native populations.

Von Hagen plans to return to Kenya for a longer stint of elephant research, working in conjunction with major conservation groups, including Wildlife Works, Save the Elephants, Earthwatch and the International Elephant Foundation.

Much of her research has taken place in the Kasigau Wildlife Corridor, home to the country’s largest elephant population and an area of high human and elephant conflict. She and fellow researchers have been hosted by Wildlife Works in Kenya, one of the world’s largest carbon offset schemes.

Von Hagen said crop-raiding is an often-overlooked threat to people and elephants in many parts of Africa and Asia, as elephants move from protected lands into small shareholder farms, where they consume or trample crops. This creates conflicts between elephants and people: Elephants’ lives are endangered when farmers retaliate, and the livelihoods of impoverished people are compromised.

“We successfully evaluated a new type of metal strip fence invented by Simon Kasaine, our colleague in Kenya,” Von Hagen said, adding that the invention, known as the Kasaine fence, or metal strip fence, has been effective at deterring elephants. “This is big news for rural people, as the method is practical, affordable and prevents habituation by elephants, three key qualities rarely found in combination.”

She and her fellow researchers also assessed indigenous trees for elephant foraging to determine biological indicators for crop-raiding. She also performed wildlife and elephant surveys with an aim to create a catalog of known elephants in the area that will help in tracking individual, mostly male elephants and identify habitual crop raiders.

Her extensive research in Africa is far-reaching.

“My work as a Ph.D. student and Presidential Research Fellow at Auburn will involve ongoing relationships with the project, but will allow me to diverge and build off of the important knowledge we have gained in the region,” Von Hagen said.

She said she plans to conduct community workshops that focus on a variety of crop-raiding deterrents, educate stakeholders on the importance of elephants in the ecosystem, introduce climate smart agricultural techniques to improve crop yields—and make crop raids less detrimental to farmers. She will also introduce sustainable livelihood initiatives and conduct an educational school program.

Those interested in learning more about the Earthwatch project, or accompanying the expedition, can learn more on the Earthwatch website or by following the project on Facebook. 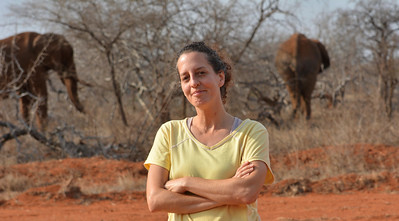 Lynn Von Hagen, a doctoral student in Auburn University’s School of Forestry and Wildlife Sciences, is leading a research study with the objective of reducing human and elephant conflict and improving sustainable livelihoods for people living in the Kasigau Wildlife Corridor area of Kenya.