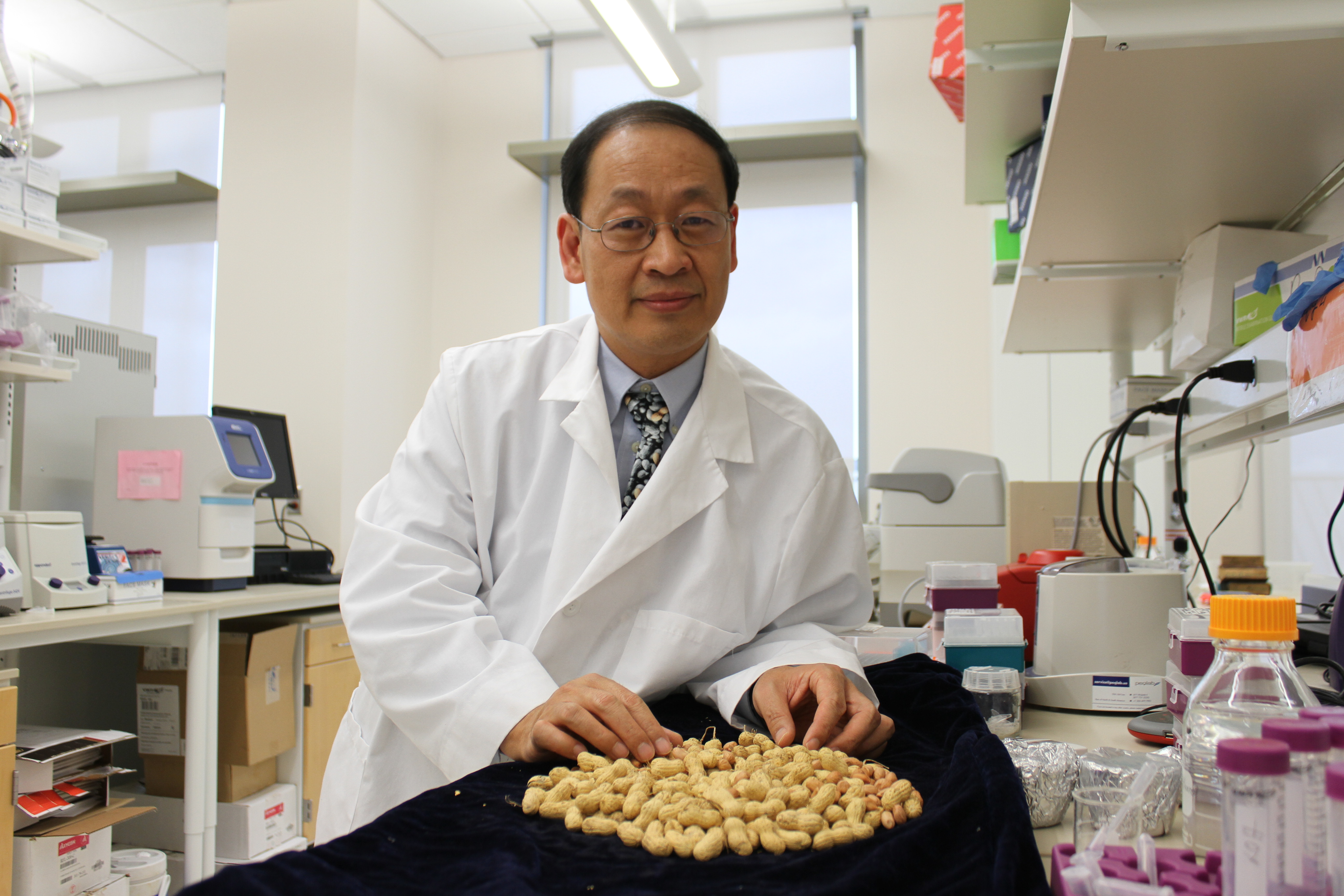 Auburn Professor Charles Chen was part of the Peanut Genome Consortium—an international team of scientists—that unveiled the map of the cultivated peanut’s entire genome, marking the completion of a rigorous five-year research project.

New and improved peanut varieties could be coming growers' and consumers' way more frequently in the future with the successful mapping of the crop's genetic code.

The Peanut Genome Consortium—an international team of scientists that includes Auburn University's Charles Chen—unveiled the map of the cultivated peanut's entire genome in January, marking the completion of a rigorous five-year research project.

The genetic breakthrough will allow scientists to pinpoint beneficial genes in cultivated and wild peanuts and use those in breeding new varieties. These traits can lead to greater yields, lower production costs, lower losses to disease, improved processing traits, improved nutrition, improved safety, better flavor and virtually anything that is genetically determined by the peanut plant.

"This project gives us the tools to accomplish a lot of different things," said Chen, a plant breeder and geneticist in the College of Agriculture's Department of Crop, Soil and Environmental Sciences and head of Auburn's peanut breeding and genetics program.

"Genetic improvement will now occur more quickly and more efficiently, and farmers will benefit greatly from the gains this research allows," Chen said. "This advancement gives scientists around the world a map that can be used to unlock the genetic potential of the peanut plant."

The discovery is a significant boost for Auburn's peanut breeding program, the youngest of its kind in the Southeast. The program's first runner peanut variety—AU-NPL 17—was officially released in 2017 and is already winning accolades for its high yields, resistance to disease, longer shelf life and healthy traits.

"We're working on new varieties that will incorporate improved disease resistance and drought tolerance, and the mapping of the genome helps tremendously with the basic science," Chen said.

An added advantage of the project is that it increases Auburn's capability to train graduate students, providing more resources and advanced technology, he said.

In 2012, The Peanut Foundation, with industrywide support, launched the International Peanut Genome Initiative, the largest research project ever funded by the industry. Peanut growers, shellers and manufacturers footed the $6 million bill.

Peanuts are a staple in diets across the globe, from the Americas to Africa and Asia. They are also a key ingredient in ready-to-use therapeutic foods that treat severe acute malnutrition and a crop that farmers in developing countries rely on for personal and community economic well-being.

"Mapping the genetic code of the peanut proved to be an especially difficult task, but the final product is one of the best [genome maps] ever generated," Steve L. Brown, executive director of The Peanut Foundation, said. "We now have a map that will help breeders incorporate desirable traits that benefit growers, processors and, most importantly, the consumers that enjoy delicious and nutritious peanut products all over the world."

"Peanuts are already more sustainable and affordable than any nut available today, and consumers choose them for their flavor and familiarity," he said. "I don't know that any of us can fully articulate what this advance means to our ability to grow more peanuts with fewer resources to feed the world. But I'm excited just thinking about the promises ahead of us."

The Peanut Genome Consortium was comprised of scientists from the U.S., China, Japan, Brazil, Argentina, Australia, India, Israel and several countries in Africa. In addition to Auburn's Chen, the U.S. research team included University of California-Davis, University of Georgia, Texas A&M University, North Carolina State University and University of Florida researchers, along with scientists at USDA–Agricultural Research Service labs in Tifton and Griffin, Georgia; Stillwater, Oklahoma; Ames, Iowa; and Stoneville, Mississippi and from the National Center for Genome Resources in Santa Fe, New Mexico. Researchers with the Huntsville-based HudsonAlpha Institute for Biotechnology coordinated the assembly of the final peanut genome.

The entire report is available on the Peanut Foundation website at www.peanutfoundation.org.