An Auburn University professor says human-induced methane and nitrous oxide gas emissions overwhelm terrestrial carbon dioxide uptake—contributing to climate change—and thus should be reduced to alleviate the problem, according to a study published in the March 10 issue of the scientific journal, Nature.

Hanqin Tian, director of the International Center for Climate and Global Change Research in Auburn's School of Forestry and Wildlife Sciences, is the lead author of "The terrestrial biosphere as a net source of greenhouse gases to the atmosphere." His Auburn colleagues, Assistant Professor Shufen Pan, research fellow Jia Yang, graduate student Bowen Zhang and former research fellow Chaoqun Lu, now an assistant professor at Iowa State University, served as co-authors among an international research team of 23 scientists from 16 institutions in four countries.

Nature is widely regarded as the world's most highly cited interdisciplinary science journal.

"This study for the first time, to the best of our knowledge, examined the net balance of three major greenhouse gases of carbon dioxide, methane and nitrous oxide in the land biosphere and the contribution of human activities during the past three decades," said Tian, who serves as the Solon and Martha Dixon Professor and Alumni Professor at Auburn.

The terrestrial biosphere plays a critical role in the global carbon cycle and is commonly recognized as a carbon sink, which means to sequester atmospheric carbon dioxide and hence mitigate climate change. But the human transformation of the land biosphere also caused a large amount of methane and nitrous oxide emissions. From both science and climate policy perspectives, he says it is of critical important to concurrently estimate the overall balance of the three major greenhouse gases in the land biosphere.

"The global warming potential of methane and nitrous oxide are 28 and 265 times larger than that of carbon dioxide, respectively," Tian said. "We analyzed and synthesized the state-of-the-art estimates of biogenic fluxes of these three gases at global and regional scales to better understand the climate-ecosystem feedback and effectively mitigate climate change. The net balance of human-induced greenhouse gases could to some extent reflect the role of the land biosphere in shaping the climate system."

The researchers found that the cumulative warming capacity of concurrent methane and nitrous oxide emissions is a factor of about two times larger than the cooling effect of the global land carbon dioxide uptake, based on the global warming potential on a 100-year time horizon.

"This finding reveals for the first time that human activities have transformed the land biosphere to act as a contributor to climate change," Tian said.

The study also finds that human-caused biogenic fluxes of these gases in Southern Asia, a region including China and India, led to a larger net climate warming effect, compared to other regions. A major source of human-caused methane emission comes from rice cultivation and livestock, while a major source of nitrous oxide is from the use of manmade fertilizers.

Co-author Anna Michalak of Carnegie Institution for Science in Stanford, California, said, "Here we bring together information from dozens of sources to show that human actions, on a global scale, have caused the world's plants, animals and microbes to contribute to global warming."

Tian added, "We suggest that adoption of best practices by policymakers and landowners to reduce greenhouse emissions from human-impacted land ecosystems could reverse the biosphere's current warming role."

Fellow co-authors echo the impact of the research results.

"This study is an excellent example of science in the service of society," said Jerry Melillo, who serves as chairman of the U.S. National Climate Assessment committee and holds the rank of distinguished scientist at the Marine Biological Laboratory in Woods Hole, Massachusetts. "Its rigorous analysis of the fluxes between the land and the atmosphere of three major heat-trapping gases does two things. It highlights the role of land management across the globe in driving climate change and it identifies land-management actions that can become part of a climate mitigation strategy."

"This study is the first-ever global synthesis of emissions and sinks for each region of the globe, and the three main greenhouse gases affecting climate change," said Philippe Ciais, who serves as convening lead author for the fifth assessment report of the Intergovernmental Panel on Climate Change, or IPCC, and associate director of the Laboratoire des Sciences du Climat et de l'Environnement in France. "Its strength is that the greenhouse gas fluxes estimates from ecosystem models are verified by independent atmospheric concentration measurements in atmospheric inversion."

Josep Canadell, executive director of the Global Carbon Project in Australia, added, "The results are a big wake-up call for the global climate community that show the way we are managing our lands is not sustainable and not consistent with stabilizing the climate at low temperature scenarios. How we manage the global lands needs to become a central part in our strategy to mitigate global warming."

The article is available on the Nature website, http://www.nature.com/. More information about Auburn University's International Center for Climate and Global Change Research is available online at http://wp.auburn.edu/cgc. 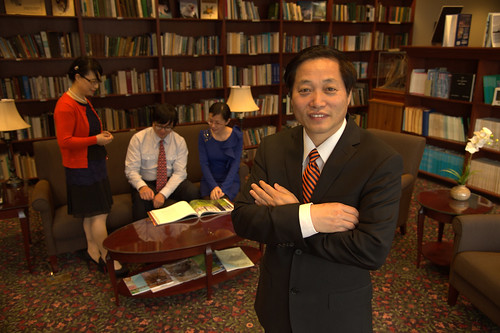 Categories: Energy & the Environment, Auburn In the News