The high school's BEST Robotics team leaders, Zena Banker, Ernald Jules Aloria and Joshuah Noel, represented the team at the White House and stood behind President Barack Obama during a broadcast address in which he elaborated on the importance of science education. The students also interacted with the president, as well as peers from across the nation, engineers, scientists like Bill Nye, high-level senior government officials, private sector representatives and others.

Wetumpka High School is the only BEST Robotics team in the nation to receive an invitation to participate in the 2015 White House Presidential Science Fair.

The students traveled to Washington, D.C., as representatives of Friends of BEST in Alabama, a not-for-profit organization formed in Alabama to provide additional resources supporting education and workforce development.

The three student representatives were selected by Friends of BEST in Alabama to participate in the science fair based on their performance with BEST Robotics, as well as a written essay.

Banker, who also was invited to participate in an exclusive women's roundtable discussion at the White House, wrote an essay about her early childhood spent in foster care due to biological parents who were addicted to alcohol and drugs. She described how her life changed for the better at age 6 when she was adopted. Once a shy young lady without strong friendships, she detailed in her essay how her blossoming interest in science has led to both respect from her peers and new friendships.

"I wasn't exactly the smartest kid when I was in middle school, and other kids made fun of me because of it," said Banker. "In high school, I caught up."

Banker, who is a junior, currently has the highest grade point average in her class and is the co-captain of the BEST Robotics team.

"I realized I liked science when I was in eighth grade and I joined the robotics team when I was a freshman. Joining the BEST Robotics team opened my eyes to a whole new world of science," said Banker. "I now read scientific articles, have had opportunities to network with companies, and I know I want to be a biomedical engineer, specifically a tissue engineer. And going to D.C. – never in a million years did I think I would do that!"

BEST, which stands for "Boosting Engineering, Science and Technology," is a program sponsored by Auburn University's College of Sciences and Mathematics and the Samuel Ginn College of Engineering. BEST Robotics is recognized and supported by the Alabama Governor's Office of Workforce Development, as well as hundreds of businesses, industries and other community partnerships across the state of Alabama. Designed for middle and high school students, the national, all-volunteer program was introduced to the state of Alabama by Auburn University in 2001. During the past 14 years, BEST Robotics has expanded within the state to include 11 competition sites with nearly 200 public, private and homeschools participating.

BEST Robotics culminates in one of three regional championships, including South's BEST. The South's BEST championship is headquartered at Auburn University and in 2014, it featured the top 56 teams from multiple states, including Alabama, Tennessee, Florida, Georgia, Mississippi and Louisiana.

The Wetumpka High School robotics team is a member of the War Eagle BEST hub, and in 2014, they were the highest-ranking team in the state of Alabama and the second-highest at the South's BEST championship. To applaud their achievements, the Business Council of Alabama recently presented the team with the BEST of the BEST Award for the state of Alabama.

"I cannot think of a better group of students to showcase how BEST Robotics changes lives and allows students to imagine themselves as future scientists and engineers," said Mary Lou Ewald, director of outreach for the College of Sciences and Mathematics at Auburn. "The War Eagle BEST staff at Auburn University is extremely proud to have the Wetumpka High School students represent us at the White House." 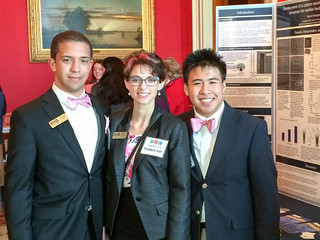